Colaw for the 64th event being planned for August 12

A day of action is being planned for the Colaw Campaign on August 12 which will include training, canvassing in some of our more walkable neighborhoods with Rebecca Colaw. She is also seeking input from Prince Georgians about issues in and for the County.  Carol Dois Woodward will be the contact point for the event on August 12 and she can be reached on Facebook, by Messenger, or by email at woodwardcd@aol.com.  So come meet the candidate on August 12, wear some comfy shoes, and help spread the word.

Susan Vargo is the only person, so far, who has filed for the Treasurer special election. The registrar’s office confirms that her filing has been certified and she will be on the ballot. Ms. Vargo currently works in the Treasurer’s office.  We have heard two filing deadline dates for this election … August 17 and August 18.  If in doubt file by the 17th.

PG Dems Booth at Prince George Back to School Fair

The PG Dems have a booth at the Prince George Back to School Fair to be held on August 24th, from 4 to 7 pm.  This is one of the largest community events in Prince 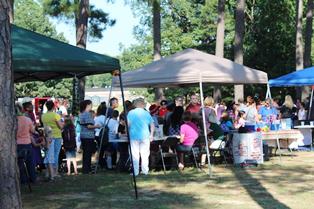 George.  Last year over 1200 back packs filled with school supplies were distributed.  In addition there was a petting zoo, therapy dogs, snacks, children’s activities, and other enjoyable things were going on at the event.  At our booth we will not only have school supplies to put into the children’s bags, we will have any campaign literature provided to us and we will be located next to Rebecca Colaw’s booth.  We will need PG Dems to help manage the booth, perhaps register voters, and provide information on the Restoration of Rights (RoR).  We will have a sign-up sheet at the meeting on Thursday night.

What are the major issues facing Prince George County