Saturday, September 9th, six of us knocked on doors in the 62nd and the 64th Virginia House districts for the Coordinated Campaign.  It was one of those classic mild, lovely blue-sky days that September can be known for.  As Monday is September 11th, it is well to remember that day in 2001 when our culture took on an indelible memory.

For a very short period following that fateful day, we were ALL New Yorkers and we were ALL Americans.  We really are still ALL Americans and ALL New Yorkers, and All Houstonians, and All Floridians.  Hopefully our hearts, regardless of party affiliation, will help us embrace ‘Dreamers’ and others, willingly or not, who braved the elements to live, work, and raise families in the United States. 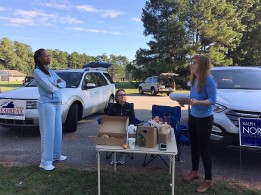 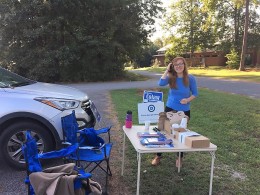 I actually was reminded of September 11, 2001 as I canvassed (knocked on doors) in the Bland precinct on the 9th.  Some short stories …

We met an Army Reserve voter who loves the electoral process, Democrats, working the polls, and serving her country. In short, she loves Democracy and the American way of life. “Serve, don’t complain, get ‘er done.” She is very interested in the candidacies of Rebecca Colaw for the 64th Virginia House District and Ralph Northam for Governor, as both are veterans.  They have proven their commitment to service to her.

We met an avowed “conservative’ who is tired of labels and wishes that politicians after elected, would become issue oriented and work diligently across the aisle to solve problems.  During elections, he doesn’t trust anything the candidates say because they will say whatever they think will get them elected.

We met a voter who had moved back to her parents home with her children to help her father through cancer treatment, but who wants to phone bank and help the Democratic candidates get elected.

We met another avowed “conservative” weary of teachers teaching to the SOLs and not teaching how to calculate math problems, how to parse sentences, how to read history and put it into context. He doesn’t blame the teachers … he blames progressives … which we took to mean Democrats. But he opined that both parties need to get back to basics and work to solve real life problems facing citizens and communities.

There are more stories from that day, but we met a cross section of people … all polite, all conversational to some degree.

Come out and learn some of these stories for yourself.

We phone bank for Democratic candidates on Tuesday nights from 5 to 8 at the Prince George Human Services Building and we canvass (door to door) Thursdays from 5 to 8 (meeting at the Scott Park Pavilion) and on Saturdays in blocks at 9, 12, & 3.  Select a Phone Bank or a Canvass and show up.  We are a team.

This blog is authorized by and the site is paid for by the Prince George Democratic Committee.