And thank you, FJ!

Floyd M. Brown, Jr. defeated Joe Wallace with a 4 point spread, though Wallace carried Richard Bland, Templeton, and Harrison precincts.  Brown, however, decisively carried the Union Branch and Rives precincts, as well as the absentee ballots.  He obviously understood the dynamics required to win the election. The third candidate in the race, Shayne Bridgman, took 7.1 % of the vote.

This will be Brown’s first elected office, though he had run for the Board in the last election.  He is native to the county and his father, Floyd Brown, Sr., has served in the past as an appointed member of the Board of Supervisors.  Both of his parents have served the county in a variety of roles, particularly on the Planning Commission (Floyd, Sr.) and on the Board of Zoning Appeals (Erma Brown.)

Floyd (FJ as he is known to some) is currently the Treasurer of the Prince George Democratic Committee and is a leader in a number of civic and service organizations.  He is a computer technologist and partner in a technology services firm.  He will represent District 1 along with Alan Carmichael.

Marlene Waymack handily won the election in the District 2 race against the incumbent Board Chairman, Bill Robertson, and against former Board Member, Bill Gandel.  This octogenarian and first-time political candidate carried every precinct including the absentee ballots.  There is little doubt that the campaign manager, Joseph Waymack, engineered a winning strategy, including the expected last-minute negative campaign mailer.

Waymack also has long-term, generational ties to Prince George County and has served in the Registrar’s office in the past.  She currently works at John Randolph Medical Center.

It is likely that there will be a Waymack representing District 2 for many Boards to come. She joins TJ Webb, and Donald Hunter as representatives of District 2.

Approximately 43.4% of the registered voters turned out to vote.  The writer does not know if this level of participation is typical of a non-presidential election year, but the statewide races for Governor, Lieutenant Governor, and Attorney General, as well as the feisty House of Delegate races, generated plenty of annoying advertising.  Congratulations to Floyd Brown, Jr. and Marlene Waymack, and to all of the candidates for their commitment to serving our county.

It’s time to get the buzz on …

Enough excuses already!  Sure you have all said

From dog catcher to Presidential every elected official in some way affects the everyday lives of everyday people.

This year we are electing the Governor (Ralph Northam), Lieutenant Governor (Justin Fairfax) and Attorney General (Mark Herring) … all in statewide races.

Every House of Delegate (HOD) member is up for election.  In Prince George we have 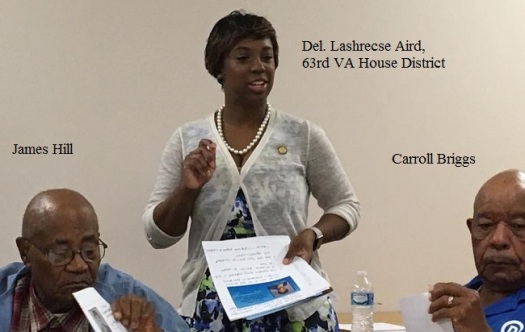 three HOD districts:  The 62nd has the Democratic nominee Sheila Bynum-Coleman challenging a 30+ year Republican incumbent.  In the 63rd Democratic incumbent, Lashrecse Aird, is unopposed, but she still needs to hear from her constituents and needs their support.  The Democratic Nominee for the 64th HOD district is Rebecca S. Colaw, a 20 year Air Force Veteran who deployed in wartime and now a practicing attorney and horsewoman.  Rebecca is running against a Republican newcomer who owns a wine shop. There is no incumbent.   It is clear from the demographics that both Shelia and Rebecca can handily win their districts … if we do our part! 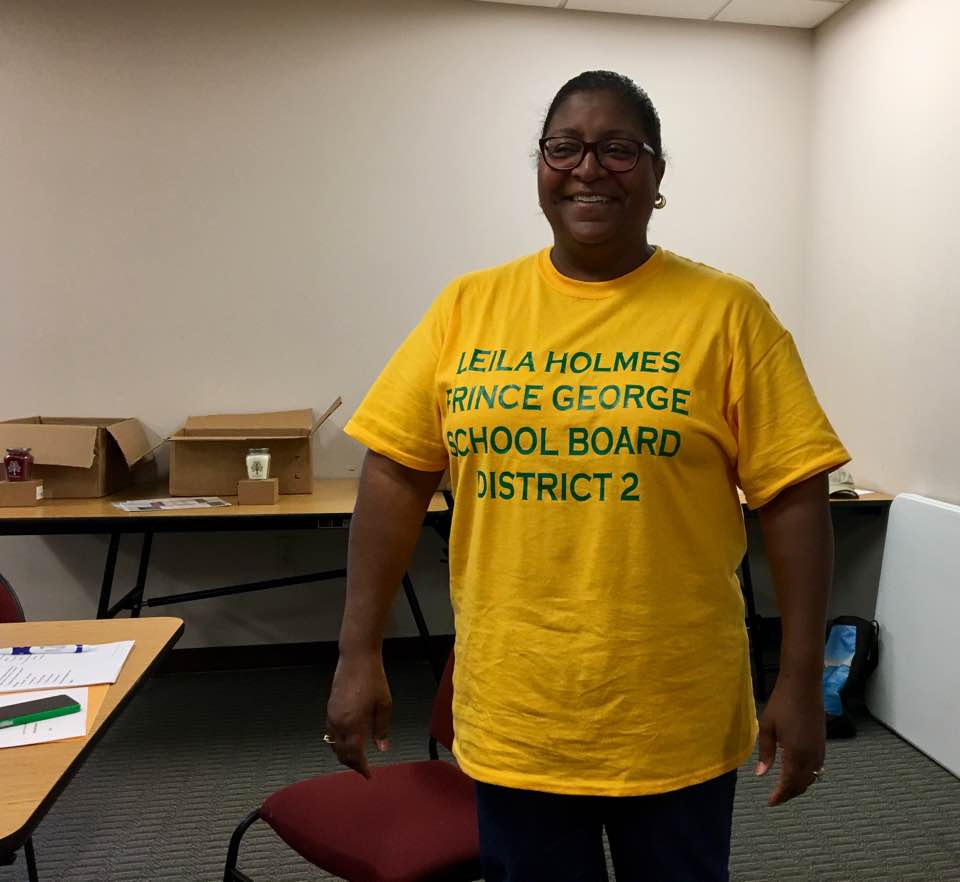 You are needed … to

The Prince George Democratic Democratic Committee hosts a Phone Bank every Tuesday night from 5 pm to 8 pm in the Prince George Human Services Building, Community Room, 6450 Administration Drive.  This Phone Bank supports the Coordinated Campaign including the HOD campaigns.  Come on by.  Give 2 or 3 hours. Or bring some soda pop, snacks or a casserole.

The Prince George Dems will hold their regular monthly meeting on Thursday, September 7 at 6 pm in the same room as above in the Human Services Building in the Prince George Government Complex, 6450 Administration Drive.  We have guest wifi, a refrigerator, microwave.  We can have a meeting and a party.

The Southside Virginia Association of Realtors (SVAR) has endorsed certain candidates for election on November 3rd.

In state races which have districts in Prince George, SVAR endorsed Senator Rosalyn R. Dance for reelection to the 16th Virginia Senate District and  Lashrecse Aird for election to the 63rd Virginia House of Delegates District.

For the complete announcement by SVAR please click below.

The Townhall will be at the Disputanta Community Center from 6 to 8 p.m., on October 1. There will be light refreshments and a great opportunity to get to know Floyd and Renee better.  It will also be a super opportunity to share your concerns and issues and to hear about their visions for District 1.

Remember and share with all that this is one election where you can vote for both Democratic candidates.  There are two seats for District 1 on the Board of Supervisors. All of the other candidates are supposedly Independents, but certainly do not identify with principles of the Democratic Party.

Plan to spread the word about this important opportunity to get to know and ultimately elect two Democratic neighbors to the BOS.

This is a fairly comprehensive article from Amir Vera of the Progress-Index, but there are a few things to point out …

Melvin C. Jones has stated to many that he did not foreclose running for reelection this fall as a quid pro quo for the interim appointment to the District 2 vacant seat.  For your information, though Melvin is running as an Independent, he is a member of the Prince George Dems.

Proudly, there are two Democratic candidates running in District 1 against the two Independent incumbents.  B. Renee Taylor Garnett and Floyd M. Brown, Jr. are members of our Democratic Committee and are excellently qualified for the two District 1 seats.

There is another Independent candidate running in District 1 … Engo H. Radant.  Can anyone share information about this candidate?

As you meet or interact with the candidates for the Board of Supervisors in your district ask them point blank if they support single member voting districts, rather than the at-large district system we now have.

We may also be discussing a draft Committee Single+Member+Voting+District+Committee+Resolution in favor of single member districts in Prince George County.

The Board dealt with the issue of the the vacant District 2 seat for only about 30 minutes at its March 9 Budget Work Session.  The three nominees named last night were Bill Elliott, Marlene Waymack, and Sheila Minor. Note the absence of Reid Foster as a nominee.  If the Board cannot find a compromise candidate or that third vote cannot be found for Waymack or Minor then the Chief Judge of the Circuit Court will make the decision.  None of the 13 contenders are out of it yet.

There is a regular Board of Supervisors meeting tonight. Work session begins at 6 p.m. County Admin Building, third floor.

Board to take up tabled action regarding appointment of District 2 Interim Supervisor:

None of the three nominees received three votes at the March 3rd consideration of appointment to fill the District 2 vacancy on an interim basis.  The March 4th post outlines the nominees and votes.

It is possible that during the intervening week as one Supervisor or another has attempted to persuade one of the other Supervisors to support his candidate, efforts may have been made to search out a compromise candidate from the nine other interested citizens.

One source has indicated that the 9 remaining contenders are not out of the running.

Plan to attend the budget session on March 9 (Monday) at 6 p.m. at the BOS meeting room.  Watch democracy in action.

Time is short.  If you have interest in being appointed to the District 2 vacancy on the Prince George Board of Supervisors complete your letter of interest and get to the County Administrator’s office by Monday, March 2.  Be prepared to speak to the Board at its Work Session at 6 p.m. on March 3 to tell the Board about your interest in person and cite your bona fides.  For more details click here.

Join 3,236 other followers
Follow The Prince George Democrat on WordPress.com