Mr. Gasparotto, Investigator with the ACLU of Virginia, will dicuss the issue of voting rights for incarcerated non-felons at our meeting on March 7. His approach may focus on the legal path, consisting of finding a plaintiff with standing, possibly identifying data to demonstrate the scope of the problem, and pursuing a legal suit.

The Committee has been exploring the voting needs of incarcerated individuals who are either serving sentences for misdemeanors or are incarcerated while awaiting trial. Their information about and access to absentee voting is impaired just by the fact of incarceration, but these are persons who otherwise are eligible to vote, don’t have access to the absentee ballot.

The Committee will have Senator Rosalyn Dance (VA Senate District 16) speaking at our April 4th meeting, pehaps joined by Delegate Lashrecse Aird (VA House District 63), to discuss not only the 2019 General Assembly Session, but also some legislative approaches that might assist in getting better absentee voting rights for non-felons faster than can be accomplished through the court process. Tammie Miller Jennings and others have already been exploring this topic with General Assembly members.

While we don’t know the numerical scope, we know it is likely a statewide issue.

Please make plans to attend our strategy meeting at 6 pm on Thursday, February 8th, in the Prince George Human Services Building, 6450 Administration Drive, Prince George Government Complex.  You are invited to attend even if you have never been a member of the Prince George Dems.  Are you part of another organization that might like to share ideas with us?  Come meet with us.  More information will follow so what Facebook and your email.  You may contact Carol Woodward at woodwardcd@aol.com or by Messenger at Carol Dois Woodward.

The 4th Virginia Congressional District Committee, of which our Local Committee is a

The next Central Committee Meeting is on March 3 in Richmond at DPVA Headquarters, 919 E. Main Street, Sun Trust Building.  The eleven Congressional District Committees meet quarterly to conduct business governing the State Party.  Visitors are welcome.  Remember that all Democratic Party meetings are open to the public.  Carol Woodward is Secretary of the 4th CD Committee and accordingly, will be attending.  If you would like to attend as an observer you are welcome to ride along and learn more about the Party.  Learn more about the Democratic Party of Virginia.

Next Regular Meeting of the PG DEMS.

We meet next for our regular business meeting on March 1 at 6pm at the Prince George Human Services Building.  Learn more about the PG DEMS.

As a Democratic Party member and advocate, it is our duty to educate ourselves and others about issues and candidates.  Other than voting, this is our primary responsibility.  If we don’t accept the responsibility to do this, then we should not blame others for our ignorance.

The election is in 30 days!

Today, October 8th, marks the one-month milestone before citizens go to the polls on November 7th.  Before then …

October 16th is the deadline to register to vote in the November 7th election.  Already registered? Double check your registration for correctness at your county registrar’s office or by going online at www.elections.virginia.gov.  This is especially important if you have moved or had a name change since the last election.  The Prince George County Registrar’s office is on the Second Floor, South Wing, of the County Administration Building.

October 21, 5:00 pm is the deadline to request an absentee ballot to be mailed to you. A request by mail must be received by 5 pm that day.

The election in Prince George:

The Democratic nominees for the statewide offices are:

Governor:  Ralph Northam, currently the Lieutenant Governor.  He is a physician and Gulf War veteran.  Ralph is a native Virginian, having been born and raised on the Eastern Shore.

Lieutenant Governor:  Justin Fairfax, is a lawyer, former prosecuting attorney, and now a

defense attorney in Northern Virginia.  This young man and his three siblings were raised by a single mother.  All four went to college and two went to law school.  Justin’s law degree is from Columbia University where he was on the Law Review.

Attorney General:  Mark Herring is currently the Attorney General.  He has fought for women’s reproductive health rights, expansion of Medicaid, challenged the Trump Immigrant Travel Ban, and many other efforts to protect the rights of Virginia citizens.

62nd: Sheila Bynum-Coleman is challenging Riley Ingram, who has held the seat for

almost 3 decades.  She garnered about 40% of the vote in the last race and has continued her quest to become the Delegate from the 62nd because she is someone who will listen to and fight for the right of citizens.

63rd: Delegate Lashrecse Aird is the incumbent and is unopposed 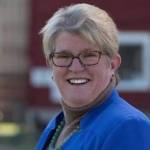 64th:  Rebecca S. Colaw is the Democratic nominee for this seat which has no incumbent.  Rebecca is a Gulf War Air Force veteran herself and is currently an attorney in Suffolk.  She is very interested in workforce development and the expansion of broadband throughout the 63rd.  Being a horsewoman she is also particularly interested in the agricultural challenges in the district.

Board of Supervisors, District 1:  Floyd Brown, Jr. is the candidate in this district.  He is uniquely qualified having been born and raised in the district.  “FJ” is a business owner and IT professional and understands the challenges to our Prince George,  as both a rural community, as well as a close neighbor to the urban development to the northwest of Prince George.  F.J is the Treasurer of the Prince George Democratic Committee.

School Board, District 2:  Leila Holmes, a member of the Prince George Democratic Committee, is the candidate for this seat.  She has been an active parent and citizen volunteer in the school system and has made it a practice to attend and comment at the school board meetings.  She will advocate for transparency and fairness in our schools and will advocate for the best educational opportunities for all of our students.

All of the candidates have web pages and most have presences on Facebook and Twitter.  The easiest way to find their presence online is simply to google a name and go from there.

Early this week we will load the sample ballots for each Prince George Precinct on the Documents page and we will continue to update the events page.  If you learn of a political event we should publish, please share that information with Carol Woodward.

Sheila Bynum-Coleman, the Democratic candidate for the 62nd Virginia House District, shared some of the strategies she is learning from the Rural Caucus of the Democratic Party of Virginia (DPVA) and other organizations, about how to campaign effectively in rural or exurban districts.  Needless to say, religious communities can play a major role in this effort, directly or indirectly, congregations are fertile sources of voters and campaign volunteers.  How best to reach them?  Providing literature and speaking when allowed are terribly important musts for a campaign.

Rebecca S. Colaw, the Suffolk lawyer who is the Democratic candidate for the 64th Virginia House District, was on her way to the meeting when she was stalled by a massive traffic jam in a more populous area of the district.  The 64th covers about 80% of Prince George County in terms of territory and voters.  We tend to forget about the 64th because the current Republican incumbent did not make himself available to Democratic constituents.  Though we are on the northern fringe of the 64th, Prince George represents the second largest voting locality in the 64th.  Rebecca reported by phone that she and volunteers are planning on knocking on Prince George doors in late July.  She is also using Facebook extensively and asks that we like her page and share it with our friends and other pages.

At this point, Delegate Lashrecse Aird  (63rd Virginia House District) is unopposed, but she still needs the support of those in her district to continue her work on behalf of our Tri-Cities area.  She and Delegate Price (95th) are hosting a webinar on July 12th at 6:30 pm to discuss new laws which went into effect on July 1.  You must rsvp to attend the webinar at www.tinyurl.com/AirdPriceWebinar.

Remember that all of our candidates need our support … donations, knocking on doors, sharing Facebook messages, texting, and or calling others on their behalf.

Carol Woodward is available to answer any questions about the recent meeting of the 4th Congressional District Committee on June 17.  It was a great first meeting of the reorganized 4th CDC.  We had a great time and were entirely inspired by Lieutenant Governor Ralph Northam, his recent primary opponent Tom Perriello, Senator Mark Warner, and our own 4th CD Congressman, Donald McEachin.

Some upcoming events to get on our calendar:

We may be able to have a booth at each of these events to register voters, sell our candles, and assist our candidates.

The General Assembly will be back in session later today

Among the newest state senate members will be Jennifer McClellan, who was formerly a member of the Virginia House of Delegates.  As of the special election yesterday she now represents the Virginia 9th Senate District.  You may remember that Donald McEachin was elected to the U. S. House from the 4th District in November.

Keep up with the big doings of the General Assembly

Did you know you can learn who your representatives are, their committee assignments, bills they are sponsoring, and many other things on the General Assembly website?  You can track bills and resolutions by number or by keyword.  Check it out. virginiageneralassembly.gov.

Whether or not you are in their districts, they want to hear from you about any question or issue you would like to raise.

Time to get back into the political groove.

Tonight, January 3, at 6 pm, Delegate Lashrecse Aird and Senator Rosalyn Dance are holding a legislative town hall in Prince George at the Prince George Library.  They are going to give us a preview of what they see coming during the legislative session, but they also want to hear from Prince George residents about issues that should be addressed in the General Assembly session. 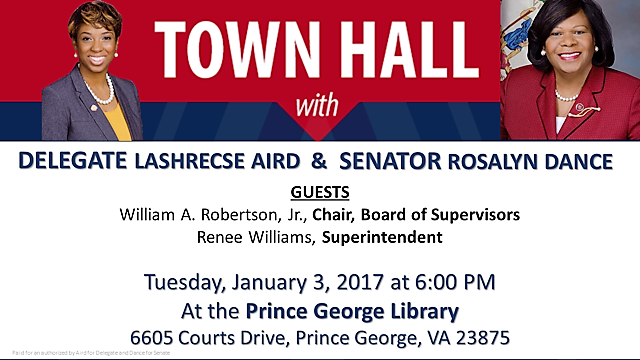 The Prince George Dems will meet at their regular time, 6 pm, in the Prince George Human Services Building, 6450 Administration Drive in the First Floor Community Room.  Dues are due ($15 per person) for the 2017-18 calendar year.  A representative of the Justin Fairfax Campaign plans to be present.  Justin is running for Lieutenant Governor. For dues please bring exact payment or feel free to pay by check.

See you tonight and on the 5th.

Please read this legislative update from Senator Rosalyn R. Dance, 16th VA Senate District.  This is a link to the Petersburg Progress-Index which published her article.  If you are not a subscriber to the Progress-Index, please consider doing so.  Supporting an active, independent press is right next to voting in our book.

Editor’s note: Sen. Rosalyn R. Dance sends weekly updates during the General Assembly session. This is her report. The 2016 General Assembly session is quickly making its way to the annual crossover date of Feb.16, when both the House and the Senate have to finish work on legislation in its’ respective chamber. As such, legislators are eager and anxious to have bills marshaled through committees and onto the floor.I want to update you on a couple of hot button issues that are